Mr Kosutic your team and the staff we have seen we as a family would like to thank you for the way you have treated us as a family at what has been a difficult time for us all not just my father. At a stressful frightening time your expertise knowledge and patience has been outstanding Mr Kosutic you performed a perforator flap after my father had a nasty cancerous skin tumour removed the scar of which has had so many comments on how neat it appears but more so of how quickly it has healed and no infection From my fathers point of view and healing he has not had to have a skin graph from elsewhere on his body and even more amazing is he still has feeling in the tissue around the scar including his nipple that you also managed to save(and although this is not of great importance to him being male and in his 80s)Such an achievement on a female of younger age on top of an all clear result is in or view outstanding Seeing you and your obvious dedication has inspired confidence that has helped us immensely THANK YOU SO MUCH

Relationship to The Christie: A family member or friend

I hope you don’t mind me emailing you rather than writing in but I would just personally like you to know how grateful I am for the care shown to my husband by one of your very skilful surgeons, Mr Kosutic.

In October last year my husband had a malignant sarcoma removed from his leg at the MRI which after receiving radiotherapy became infected with an abscess when he was then admitted to the Christie hospital in February for emergency surgery to remove it. Surgery was performed by Mr Kosutic who I cannot praise and thank enough due to the wonderful surgical skills shown which managed to save not only my husbands leg but possibly his life. Mr K worked devotedly late into the night with the theatre team in order to do this and I have already acknowledged to him and his team how grateful myself and my husband Henry are to him by performing this.

Since the operation in February, Henry has continued to be under the care of Mr K attending the Christie outpatient clinic fortnightly to have his wound renewed and redressed before It was felt healed enough to perform a skin graft on it. Two weeks ago after 7 months of treatment this was finally performed and once again I cannot thank Mr K and his team enough.  I know If my husband were able to send an email to yourselves himself of how grateful he is he would but unfortunately Henry has dementia therefore cannot do this personally.  Despite Henry’s dementia Mr K showed utmost respect towards my Henry by aiming to seek his opinion and consent and involved Henry in all decisions relating to his care at all times, a rarity often overlooked by health professionals with people with dementia. Whilst Henry may not have fully understood the procedures, Mr K maintained Henry’s  dignity and personhood by explaining the procedures in a way Henry could understand and despite his dementia treated him with the utmost respect and both Henry and myself cannot thank him enough for taking the time to value him as a person rather than just a person with dementia. Whilst Mr K has proven to be a very highly skilled surgeon in his field he also highlighted his compassion by looking beyond Henry’s  physical needs and this is what has left the biggest impression on me as I consider this approach to be often missing from within care in the NHS these days.

Whilst I have already expressed sincere thanks to Mr K and all his team who have all been fabulous and I throughout his treatment I felt I had an obligation to inform the managers at the Christie to recognise what they have done for my husband. It is not always easy to care for people with dementia but all staff have been a credit to the Christie and the NHS and the skills and dedication in particular of Mr K who worked late into  the night going that extra mile to save my husbands leg and no his doubt life I feel should be acknowledged. I feel as a society these days we are always too quick to criticise NHS care but are never quick enough to compliment it when credit is due. Therefore I feel it is my duty to say you should be very proud of the skills, care and compassionate attitudes shown by your staff at the Christie. 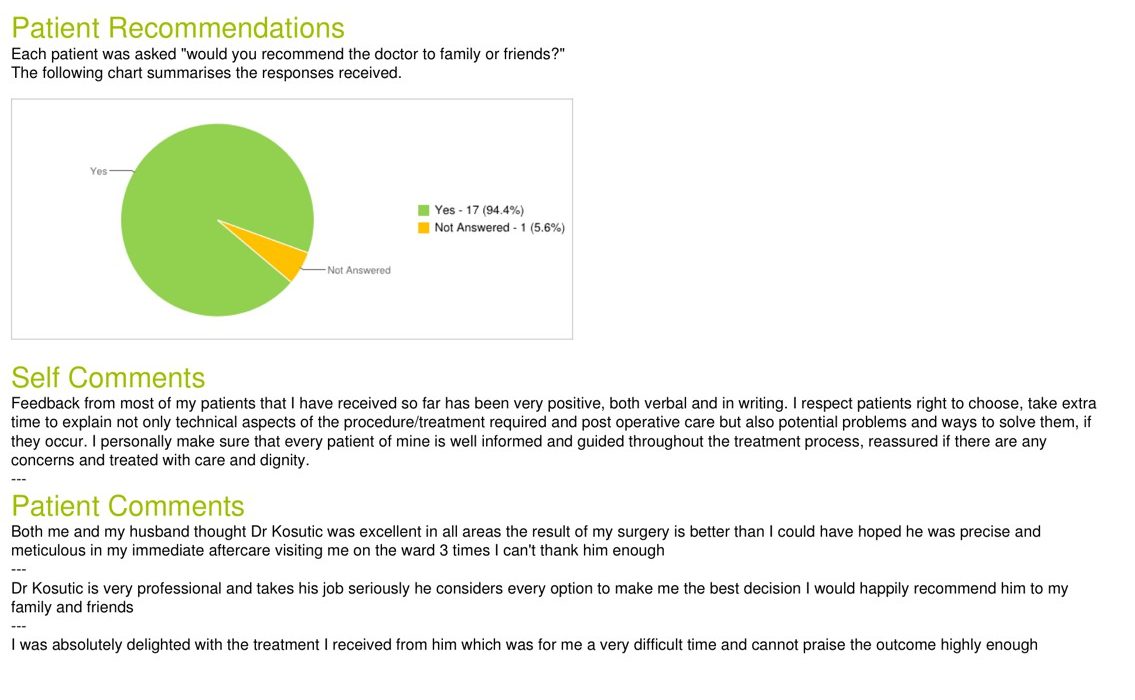 In the spring of 2015 I noticed a reddish spot on my lower left leg and went to get it checked out. It turned out that a tumour had developed over the previous 12 months, but due to me having Gross Lymphoedema in both legs, the tumor itself was not apparent until approximately six months prior to my referral to Manchester Royal Infirmary for various tests.

Following MRI scans, ECGs, blood tests, x-rays and other tests, my wife and I were told that the tumor was cancerous and that the only two alternatives were amputation of my leg or to try and remove the tumor by surgery. It was stressed that due to the cancer being extremely close to the shin bone it was considered doubtful of a good outcome. In spite of this I was referred to Mr Kosutic at The Christie.

When I met with Mr Kosutic, his first opinion was that amputation seemed the best option, but he and a colleague decided to check with a further scan. They confirmed that the cancer was only a few millimetres away from the shinbone.

Although a little doubtful, Mr Kosutic said he would operate and hopefully save my leg – a very brave decision – but somehow I had every faith in him, and six months later it is so far so good.

Prior to the operation it was explained to me that it would be a rather large wound, and so it turned out to be (19cm long by 14.5cm wide).

After the operation I needed special dressings that were put on in layers, with a 28mm thick sponge in between covering the wound. The outer layer had an outlet attached to a vacuum pump which compressed the dressing and sponge to the wound, and at the same time removed all the blood and lymph fluid, depositing it into a canister which was regularly changed. This marvellous machine allows healing to take place more rapidly.

The dressings were changed every five days for four weeks. This took a great deal of care and an unbelievable amount of patience, skill and good nature on the part of the nursing staff – angels every one of them!

In October 2015 I was re-admitted overnight for a skin graft operation. It went unbelievably well and I stopped using the vacuum pump after 10 weeks. I don’t think the wound would have healed so quickly without the pump.

I want to extend my heartfelt thanks to Mr Kosutic for his wonderful skill, the skill of his team both in and out of theatre, and also to all of the nurses and staff on Ward 10 and the Surgical Ward who looked after me during my time at The Christie. Thank you all. 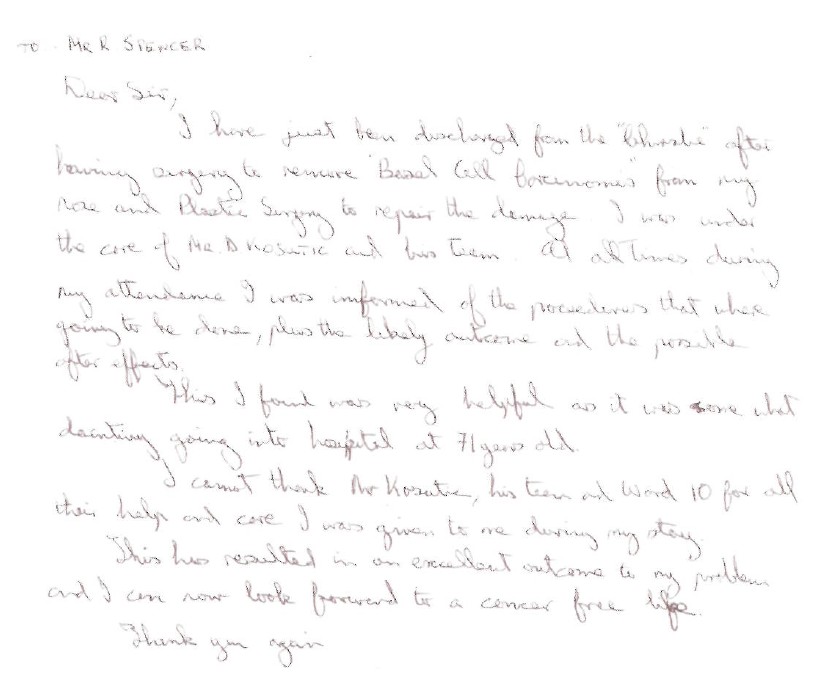 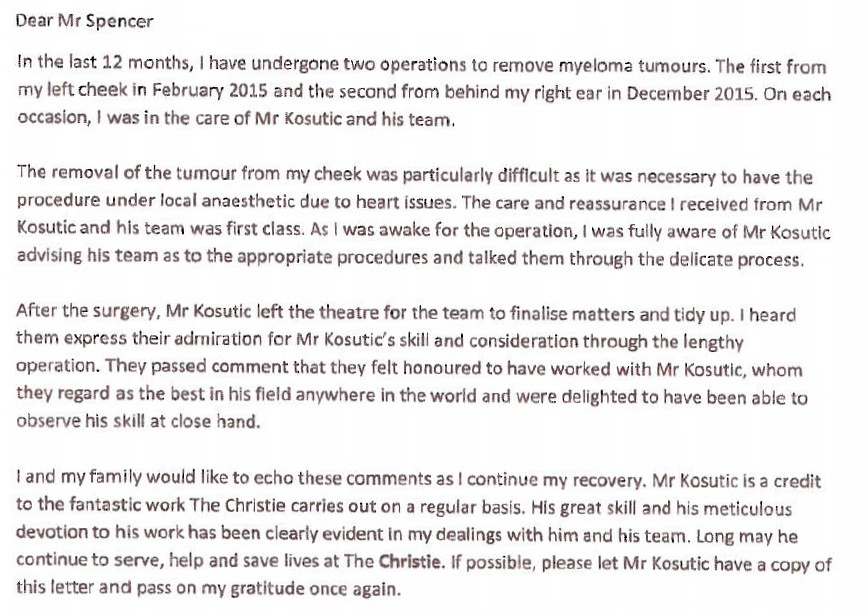 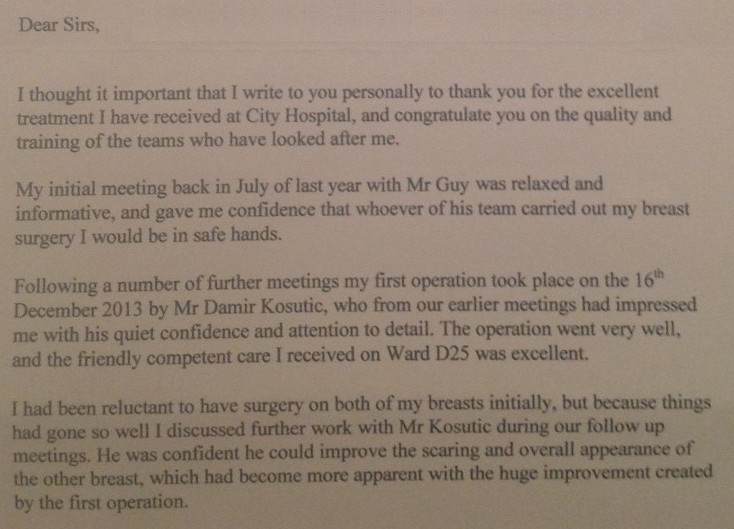